By Istvan Bujdoso | The 47 Marketing Show

Are You Sick And Tired Of Cold Calling & Chasing Leads? Discover The Solution

How I Saved 100% Time And Over 99% Ongoing Cost On Lead Generation While Getting Better Results? And How You Can Do It Too…

When it comes to business, time is money. It’s essential to make great use of your time because every second counts! Unfortunately, some tasks you for your business, like manual LinkedIn lead generation, could be incurring you hidden costs.

If you’d like to find out more about how you can automate your lead generation then visit www.47funnelsecrets.com

Today, you will find out about how I saved 100% time and over 99% ongoing cost on lead generation while getting better results and how you can do it too. Let’s jump in.

A couple of years ago, I was doing a lot of manual lead generation. In 2015-16, one of them was LinkedIn. Messaging people on LinkedIn, starting a conversation with potential clients and I was excited about it because as I was doing it consistently, we were getting results from it. Opening up new opportunities, getting leads. I was doing every single day for one hour a day even on Saturday Sunday.

And, after about six months, one morning, I was listening to a podcast where they were talking about how to value time and that we all have 24 hours in a day and how millionaires and billionaires like Bill Gates, Warren Buffett, Tony Robbins, how they are valuing that 24 hours, how they are using it, how they are using it out to the maximum and what are they using for, what is the most valuable thing that they’re doing during the day. And, I started thinking about what are the most valuable things that I can do during the day and I started the calculation with what was happening with LinkedIn. And, this is what I found out about that I was messaging people, I was using one hour of my day to message people and this is what I found out after the calculation that I was messaging people for one hour a day.

So, I spent seven hours a week just sitting there and starting conversation with potential clients. If I was doing it this for– you’re doing this for 50 weeks, I started calculating just considering two weeks of holiday in the year, I realized that I was spending 350 hours a year, almost about 44 working days in a year just starting new conversations with people. I consider this as a lead generation but still that number was like– it’s a huge number and I started calculating, what if I used it 350 hours to do something different, to do paid consultation which I was charging, around the time, I was charging $125 an hour for a paid consultation. And, I started thinking about, if I would instead of sending messages on LinkedIn, if I was instead of that doing consultation, how much money I would make and I just realized, I got a shocking number like $43,750. And, I realized that by spending 350 hours just messaging people, I’m actually losing that money, I have an ongoing cost of over $40,000 every single year and I was like, “Oh, my gosh. This is crazy.” I started to think that if I would actually spend the 350 hours a year with paying clients and consulting them or even just spent 50 hours or a hundred hours with paying clients, some of them would actually hire us to do more job, more work, bigger jobs and then and suddenly that $40,000 ongoing cost, I realized I’m not just having that crazy huge amount of ongoing cost, I’m actually losing the potential of making multiple six figures every single year by messaging people on LinkedIn. I was like, “Oh, my gosh. This is crazy. I can’t afford to lose all that money.”

So, I started looking for a solution and this is when I found. I hired a virtual assistant and I taught him the process how to message people, how to sort conversation with people on LinkedIn and then I did another calculation to find out how that looks like when he is doing it. So, this is what I found out when he was doing it, when I was doing the messaging and for some reason, he was working slower than me. He had to spend double the amount of time to message people doing the same amount of work so you spend about 14 hours a week to do them, to do the job and spent 50 weeks a year to do this and you spent about 700 hours a year, about double amount of hours what I was spending on it but still it was amazing because this is what I found out, even they were spending double amount of time, he was actually charging only $6 an hour and he was in the Philippines and he was really charging $6 per hour. And now, suddenly, my ongoing cost of messaging people, starting conversation with people on LinkedIn went down to $4,200 which is huge difference, which is really huge difference because not just it happened that it went down significantly, my ongoing cost, there was another thing. I got the same amount of leads and I got 100% of my time back because I was no longer messaging people, I could use that 100% of the time, that 350 hours to focus on paying clients and dealing with those clients. And, all of that, my cost went down over 90%, my ongoing cost went down that way and I was excited again because we were getting leads, we’re getting leads again and I had my time to focus on paying clients.

Well, after a couple of weeks, what happened, my VA actually contacted me and he quit. He said he wanted to do something different, a more exciting job, it was too monotonous. So, I had to quickly jump back and hire another VA and taught him the process how to do it which I did and in about a week, I had a new VA who was doing the job again and in about a month that VA contacted me as well and he quit. I was like, “Oh, my gosh. Again, I can’t believe this.” I was frustrated because I lost two VAs, they left and I was there again, my lead generation was stuck, it was not working from that side, from LinkedIn and I knew that I don’t want to do it again. I didn’t want to do it myself again and I don’t want to hire another VA to just do for a couple of weeks and after they leave and quit.

So, I started looking for a new solution to solve this problem and this is what I found. A few weeks later, I started using a software that was pretty much doing the same thing as a human being, it was messaging people on LinkedIn, clicking on buttons, typing in messages, just about with the same speed but the only difference was that it only took one click to start the process and he did the job and what I did, I had another VA, my third VA and I taught him how to use the software. This is what I call the SPP method, using the right software, the right people and the right processes. And, what happened was really amazing. I did another calculation and this is what I found out. Instead of hours, it only took 10 minutes per week to do the job for my VA and using that for 50 weeks a year, it really turned out instead of 700 hours, it basically only took 8.3 hours a whole year for the VA to do this job and that 8.3 hours, as I was charging like $6 per hour, my ongoing cost went down to $49.8 for the whole year. Instead of $43,000, it went down to $49, about $49 and just thinking about what happened, again, I was getting the same amount of leads, I had 100% of my time to focus on paying clients which made it easy to actually make more money than that. I was more profitable than previously and my ongoing cost from $40,000, $43,000 went to down there which is like actually 99.89% down, decrease on the ongoing cost and it’s really, really awesome. Isn’t it?

By using the SPP method, the rights software, right people and right processes, you can save an incredible amount of time and money. And, if you applying it well, the software, people, process, this method, that you’re going to get at least the same results or even better. And, this is what happened in my case, that instead of using my own 350 hours a year and my VA only uses eight hours per year for this task and my ongoing costs from over $43,000 went down to just for $49 for a whole year. So, after applying the SPP method, there are significant changes and the amazing thing, I was getting leads, I was getting a same amount of leads, I got 100% off my time back which I could use to focusing on paying clients and from this it went down by over 99% the ongoing cost which is really, really exciting. Isn’t it?

The amazing thing about the SPP method that it’s not just applicable to LinkedIn messaging like in case study, you can apply to every area of your lead generation and to driving traffic, to capturing list, warming up leads, to qualifying leads, following up with leads and you can use the SPP method to automate your lead generation. And, if you are doing it well, then you are going to save an incredible amount of time and money and you’re going to get the same, at least the same results or even better results which is really cool, don’t you think?

If you’d like to find out more about how you can automate your lead generation then visit 47funnelsecrets.com. Thank you for being here today. I hope you enjoyed this episode. My name is Istvan Bujdoso and see you on the next one.”

Are You Sick And Tired Of Cold Calling & Chasing Leads? Discover The Solution

How Lead Automation Helps You Avoid Working Like a Slave 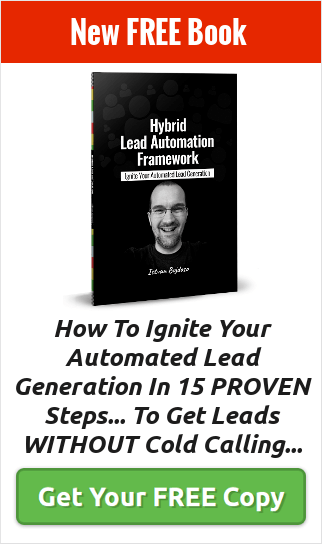